PALESTINIAN children, including a teenage boy who claims to have been tortured by soldiers, have enjoyed a visit to “beautiful” Worcester.
Mohammed Jaffal, aged 14, from the West Bank, says he was tortured by Israeli soldiers after they broke into his house in the middle of the night. Mohammed, one of 16 children from Palestine to visit Worcester, described how he was seized by the troops, bundled into a jeep, taken to a military compound and blindfolded with his hands tied behind his back, beaten and forced to kneel down on stones for half an hour. 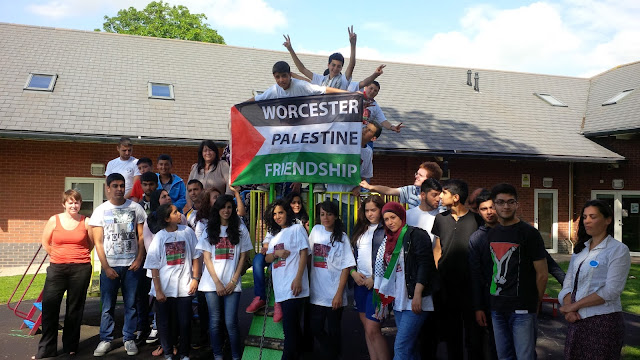 However, Mohammed and the other young musicians from the troublespot have had a chance to sample a more carefree life, visiting the Hive,Worcester Cathedraland the Guildhall where they met the city mayor Pat Agar. Drummer Mohammed and his friends played in a concert at St George’s Catholic Church, including Palestinian and British songs. During the day they played football, talked about their experiences, met other children from Britain with a very different way of life and were able to connect with each other through music, drama, the arts and sport.
Mohammed, speaking from the Horizon Centre in Midland Road, Worcester, which hosted part of their visit to the city, said: “Everything is different here. “There are so many wide open spaces for me to play. It’s so green. It is beautiful.”

The visit is part of an initiative called Common Ground by the Worcester Palestine Friendship group and is organised by the Camden Abu Dis Friendship Association (CADFA). Seven children from Gaza, who attend a centre called Never Stop Dreaming, were not able to fly to Britain because of ongoing unrest in Egypt, although they may be able to travel here within the next six months. During the project, which comes to an end tomorrow, the children will able to mix with others from Knighton, Aberystwyth, Worcester, Oxford, Northampton and London.
Nandita Dowson, director of CADFA, said: “They were able to go on the hills and go into rivers. “The thing that strikes the Palestinians is people’s freedom to move and go wherever they want. They do feel imprisoned. This is their first taste of freedom. Just going paddling in a river is heaven for them.” Their homes in the West Bank are divided from Jerusalem by the controversial Separation Wall and they are now cut off from the Dead Sea, the Mediterranean and the River Jordan.
Abdul Wahab Sabbah, Abu Dis co-ordinator, said the children here were of a generation born under occupation who could not remember a time before the wall had been built.
He said the experience for the children had been “unbelievable”. He added: “It is a lifetime’s journey for them.”
Coun Jabba Riaz was also there to welcome the children. He said: “It’s good to see the children are getting a taste of freedom.”
The centre, which is run by Worcester Community Trust, gave each child a T-shirt and a football.
Posted by zafaran at 14:36

CADFA's tenth exchange for young people of school age... More information here:
http://www.camdenabudis.net/COMMONGROUND.html
There are lots of ways that you and your youth organisation can be involved in this visit and in future ones. Do come to one of the concerts and contact us for more information.